Posted on September 8, 2014 by nevasquiresrodriguez 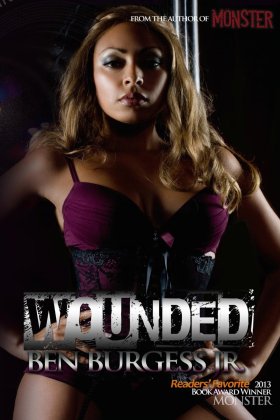 Thanks for the interview Ben!

Hello friends.  I’m super excited, because this week I’m hosting a virtual book tour!  Let me take a moment to introduce myself to the visitors.  I’m Neva Squires-Rodriguez, author of the Liliana Series, a suspense filled romance, which will leave you both speechless and wanting more.  Liliana faces numerous twisted surprises in her adventures in the United States and Colombia that are both relatable and unimaginable.  It’s a real page turner folks, I promise you, but enough about me, let’s get down to business!

Last week I had the honor of Interviewing the One, the Only, Tamara Philip author of “The Trouble with Playing Cupid” a tantalizing love story that will make your heart stop.  -Side note, I love that book.  This week I am interviewing Ben Burgess author of “Wounded” Samantha Miller, his compelling protagonist.  Friends, let me tell you, his character is hot, this interview, just doesn’t do her justice.  You simply have to meet this exciting new character.  Don’t forget to give Ben a “great” review on any site, I’m talking a five star minimum.  🙂  Us author’s love reviews.  Especially good ones.

What is your character’s name?

My character’s name is Samantha Miller.

That’s pretty hot.  It reminds me of Sam, from “Who’s the Boss.”  Does your have a nickname?

Her nickname is Sam, sometimes Sammy.

Interesting, I like it already, tell me about your character.

She sounds pretty.  What would you say is most attractive about her?

Her eyes are what draw people to her most.

Tell me more about Sam.  Describe her face for me?

I would say Samantha’s full lips and green eyes are facial features that stand out the most.

Your character is getting ready for a night out. Where is she going? What does she wear? Who will she be with?

She’s probably wearing anything that makes her feel sexy. It could be a nice form fitting pencil skirt to yoga pants. She loves to show off her figure.

Does your character have any distinguishing markings?

Samantha doesn’t have any physical scars, but she does have a tattoo that reads “Pain is Love”

Who are the characters that Sam is closest to?

Samantha’s best friends are Jackie aka” Silka” and Jaime. They are like sisters to her. Samantha grew up with them while being in the foster care system. Samantha’s mother was a drug addicted prostitute named Joan Miller and her father was a Bajan pimp known as “Silky” Samantha never had a relationship with her parents, but she wished that her life were different. She wishes she could experience what a real family feels like. Sasha is Samantha’s lover and friend. Silka, Jaime, and Sasha form a surrogate family for Samantha.

Where was your character from?

The borough of the Bronx is where Samantha was born, lives, and where she comes home.

Hmm, the Bronx, huh?  I bet she is feisty, tell me about that side of her.

When Samantha is angry, she goes “hunting.” She goes to bars and other strip clubs to look for women who are “on the fence.” She gains a faux sense of control in a reality/world where she feels she doesn’t have any.

Really wow, this character is kind of scary.  I’m almost afraid to ask any more questions, does Sam have any fears?

Samantha’s biggest fears are that her dreams will eventually consume her, she will never be more than a stripper, and she will die alone. Samantha hasn’t told this to anyone because she doesn’t like to appear “weak” to her friends.

Interesting, “her dreams will eventually consume her.”  She sounds mysterious, does she have any secrets?

Her secret is that while she acts like she strong and secure, she’s really not. She wants “real love” and she wants a family.

A family, so she has a “lighter” side?  Tell me about that.

Samantha has a very cynical sense of humor. She loves anything that is witty.

Ok, Ben, let’s get even “lighter” then cynical.  Has your character ever been in love?

The first time Samantha fell in love was with a woman she met in prison named “Cheryl.” Cheryl broke Samantha’s heart, but left a lasting impression on her. Later on in life, Samantha falls in love with Sasha.

Nice, alright tell me about Sam’s house.  Describe the things that the reader can find in it.  Don’t leave out any detail.

Samantha’s refrigerator is stocked with V8 and lean steaks. She doesn’t have junk food in her house because she has to be in top shape since she’s the headliner at the strip club. Her bedroom floor is empty as well as her garbage can. Samantha is neat and keeps everything in it place. It’s her way of controlling things.

Ok, I see, she likes everything orderly.  Does she take care of herself in the same fashion?

Samantha is looking at a pair of nice manicured toes. She gets pedicures frequently and when she’s home, she walks around bare foot.

Does Sam remember anything in particular about her childhood?  A certain room of the house perhaps?

When Samantha thinks of her childhood kitchen, she becomes depressed. She has no fond memories of her mother baking cookies or cooking in general. The only meals she remembers are cold cereal, and peanut butter and jelly sandwiches.

What is one strong memory that has stuck with your character from childhood? Why is it so powerful and lasting?

A strong memory that stands out the most is when Samantha realized she was a Lesbian. Due to the circumstance it was bittersweet discovery.

You can find Ben Burgess Jr.’s book “Wounded” at these fine retailers:

Neva Squires-Rodriguez was born and raised in a neighborhood located on the North Side of Chicago. Mother, Wife, Expert at Multitasking... and now, Author and Columnist for Reflejos Newspaper, Neva creates electrifying stories with a twist. Neva Squires-Rodriguez earned her Masters Degree from National University, a feat which she worked very hard to obtain and says she will work even harder to pay off. She claims to be a typical American, full of dreams that will hopefully get her to a more comfortable lifestyle one day. She says, “God has a plan and I will follow wherever it is that He takes me.”
View all posts by nevasquiresrodriguez →
This entry was posted in Uncategorized. Bookmark the permalink.

1 Response to Ben Burgess on Samantha Miller! ;) A character interview.